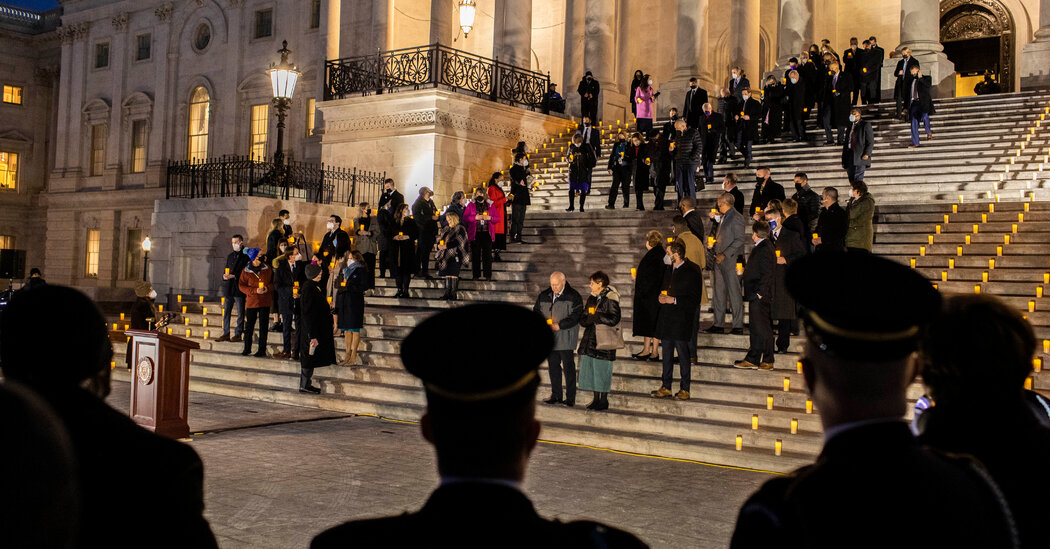 At the Capitol, a Day of Somber Remembrance

WASHINGTON — Standing on the House floor on Thursday, Representative Pramila Jayapal, Democrat of Washington, looked up to the gallery seats above and decided she was ready, for the first time in a year, to return to where she was when a mob tried to break into the chamber.

Accompanied by her colleagues, she found the seat in the balcony where she had been as the House met to count electoral votes to confirm President Biden’s victory. Free of the escape hood she held as rioters stormed the building, she walked through the gallery row, reflecting on what happened during the attack and the events since.

The seemingly small gesture was just one moment in a strange and emotional day on Capitol Hill that drifted between solemn remembrance, mass therapy session and flashy production, on the anniversary of the Jan. 6 attack.

“I think I had been afraid of what it was going to trigger — it was good to conquer that small fear,” Ms. Jayapal said in an interview. “There’s no closure. This is not an event that happened in the past. We’re tying up some ends here, and that was one of them.”

The Capitol has a familiar routine pageantry for a public tribute, as an institution that often leads commemorations of the country’s significant figures and moments, its achievements and also its darkest days. On Thursday, as President Biden and Democrats relived the brutal violence and mayhem of a year ago, the atmosphere in the Capitol was quiet and calm, and the security presence felt much lighter than it did in the days after the riot.

There was Senator Patrick J. Leahy, Democrat of Vermont, taking photos while staff frantically wiped the footprints off the shiny black stage where Mr. Biden would deliver a bracing speech condemning former President Donald J. Trump for holding “a dagger at the throat of America.”

On the Senate floor and across the Capitol in the House, Democratic lawmakers took turns sharing their recollections of the harrowing day the Capitol came under attack with them inside. Republicans, who have refused to confront their party’s role in inspiring the attack with lies of a stolen election and sought to play down its severity, were conspicuous by their absence.

Historians wrestled with how the day will be enshrined by future generations, at a panel convened by Democrats to contextualize what happened. They kicked off the forum with a recorded performance of “Dear Theodosia,” a song from the musical “Hamilton” performed by members of its cast and introduced by Lin-Manuel Miranda, its superstar creator, producing a jarring Broadway moment on an otherwise somber day.

There were just two Republicans present in the House chamber for a moment of silence commemorating the riot in the Capitol: Representative Liz Cheney of Wyoming and her father, former Vice President Dick Cheney.

While Republican leaders stayed away from the remembrances at the Capitol, Ms. Cheney — who was ousted from her leadership post for speaking out against Mr. Trump — and her father stood solemnly with hands over their hearts.

Top Democrats, who regarded Mr. Cheney as a detested foe when he served under President George W. Bush, lined up to shake his hand and greet him warmly.

It was a striking image on a day when the only official Republican event on Capitol Hill was hosted by Representatives Matt Gaetz of Florida and Marjorie Taylor Greene of Georgia, two far-right lawmakers on the fringes of the Republican Party. They held a news conference elevating conspiracy theories about the Jan. 6 assault and protesting the treatment of those arrested after participating.

Outside the House chamber, National Statuary Hall, the ornate marble-floored room that displays statues from states around the country, had been transformed into a backdrop for a slick television set, erected by CNN for a prime-time special marking the anniversary of the attack.

Surrounded with bright lights, a camera crane and teleprompters, the large black circular stage was an unusual sight in the historic hall, drawing quiet jeers from Republicans who said Democrats were making a spectacle of the anniversary. Democrats said they would accept no lectures on propriety from a party that had spread the election lies that led to the attack that was being memorialized.

Several lawmakers chose to deliver their recollections from elsewhere in the Capitol, chronicling their at times harrowing experiences for the Congressional Record and the C-SPAN archive. One congresswoman, Sara Jacobs of California, recalled how she prepared to wield a pair of high heels as a weapon if necessary as the rioters closed in on Jan. 6, which was her fourth day in office.

Senator Chuck Schumer, Democrat of New York and the majority leader, spoke about his own close encounter with the mob. He recalled how an officer grabbed him by the collar to lead him to safety, only moments before rioters reached the Senate floor.

In the same office room where the select committee investigating the attack has convened to formally hold witnesses in contempt for stonewalling its work, House Democrats spent two hours sharing their experiences, hugging and clasping hands when a colleague had finished.

The family of Officer Brian D. Sicknick, a Capitol Police officer who died after being attacked during the riot, was also there, aides said.

In addition to the traditional moments of silence conducted in both chambers, Speaker Nancy Pelosi held a private moment on the House floor for lawmakers, staff, institutional workers, police officers and reporters to reflect on the day.

It is unusual for anyone other than lawmakers and select floor staff to participate in such a personal moment that way, underscoring how deeply the events affected not only those who were there last Jan. 6, but those who helped clean up the damage and steer the institution back to some form of normalcy.

“As we acknowledge the horror of that day, we honor the heroism of so many, particularly U.S. Capitol Police, institutional staff, floor leadership, committee and member staff,” Ms. Pelosi said during the noon session.

Lawmakers concluded the day with a brief candlelight vigil on the steps of the Capitol, murmuring softly to “God Bless America” in the cold night.

But many lawmakers found significance in smaller ways around the Capitol on Thursday. Horrified by the litter and garbage left behind in the Rotunda after the riot, Representative Andy Kim, Democrat of New Jersey, spent that evening a year ago collecting trash, his blue suit becoming coated in dust and grime as he knelt on the marble floor.

On Thursday, he knelt in nearly the exact same spot — only this time to pet Gizmo, a three-and-a-half-pound Mi-Ki, one of a half-dozen therapy dogs roaming the Capitol throughout the day to provide comfort to Capitol Police officers, lawmakers and staff.

“I don’t actually step over there anymore — that part of the Rotunda,” Mr. Kim said. “I try not to mix new memories in with that feeling that I had back then because I want to keep it. I don’t want to lose how I felt that day.”