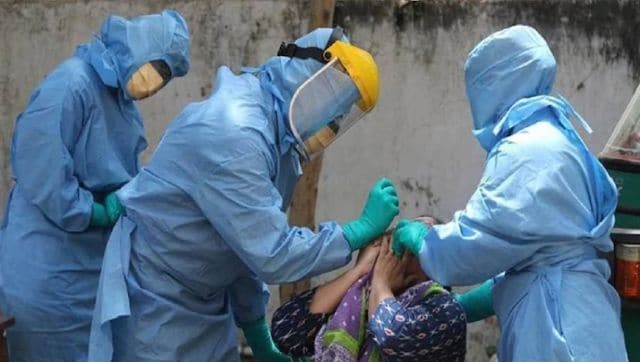 COVID-19 is back in Patna with big numbers, but why aren’t residents too worried this time?

The Bihar capital had 1,407 new victims of the dreaded virus out of 2,379 cases reported in the entire state on 5 January

Optimists have been proved wrong. History has repeated itself. The third wave of COVID-19 has assailed many parts of India. That includes Bihar, the third most populous state in the country.

Patna, the capital, has emerged as the hotspot in the state. An indicator of darker times ahead is the rapid increase in the number of those testing positive for COVID-19 every day. On Thursday evening, Bihar Health Department tweeted that the state capital had 1,407 new victims of the dreaded virus out of 2,379 cases reported in the entire state on 5 January, proving there is enough reason for exercising caution in day-to-day life. Nobody, in short, has a choice.

Bihar’s healthcare infrastructure is woefully inadequate for combating the impact of a pandemic. The under-pressure administration is on a high alert. Night curfew has been imposed in the state between 10 pm and 5 am. Theatres, shopping malls, clubs, swimming pools, stadiums, gyms and parks are closed. Same for religious places like temples and mosques which are closed for the devotee and schools for students of eighth standard and below.

On the streets of Patna, nothing has changed. The sight of residents without masks is common. Complacence, overconfidence, ignorance: there could be various reasons why the majority is so unconcerned about the emphatic re-emergence of the dreaded virus. As motorbikes try to overtake cars and cycle rickshaws block the movement of other vehicles in the cluttered Arya Kumar Road, it seems the average Patnaite is clueless about the need to be careful. Or, he simply doesn’t care.

Hari Om, an elderly rickshaw puller, is at work in the residential colony of Rajendra Nagar. He is not wearing a mask because it makes him uncomfortable. “Sahab, you have no idea. Old people like us have breathing problems when they wear masks,” he says with a grin plastered on his face. “Besides, nobody I know is ‘bimaar’ (sick) because of coronavirus,” he adds. “One must not worry unnecessarily.” Having offered a short explanation, he heads towards a potential customer standing a few feet away.

Anant Anand makes coffees and smoothies in an upmarket Boring Road cafe during the day and works as a security guard of an apartment building in BM Das Road at night. A Ranveer Singh fan, he had been waiting for the sports drama film 83’s theatrical release for a long time. “I didn’t go to watch the film after it was released because taking a risk during such times is not worth it,” he says. Few are wearing masks or maintaining social distancing to the extent possible, Anand adds. “I wonder why people indulge in such adventures when they know that Covid-19 can be so dangerous.”

Autorickshaws are a favoured mode of transport in the city. Avinash Kumar, who drives a rented autorickshaw, is waiting for his customer who has gone to meet a doctor in an eye clinic in Kankarbagh. Kumar says, “When the disease had struck last time, many people were falling sick. I didn’t have any work for many months. My family suffered a lot. Nowadays, there is no such thing. Theatres and junior classes in schools have been closed as a precautionary measure and not because people are falling sick.” Many Patnaites need to know that COVID-19 is a real threat.

Residents of Bihar from villages close to Patna come to the city to make a living. Rameshwar Singh from Barh, who sells vegetables on a mobile cart, speaks to this writer in Ashok Rajpath: “Is baar corona utna jyada pareshan nahi karega. Humko kisi tarah ka chinta nahi hai” (Corona won’t trouble that much this time around. I am not worried at all). Singh sells bottle gourds, and he uses his towel that he ‘usually covers his face with” to wipe a bottle gourd before selling it to a customer.

A family of six is heading towards Patna Medical College and Hospital. Ashutosh Prasad, who owns a ‘business’, appears to be the head of the family. A lady accompanying him has covered her face with the pallu of her sari. Nobody else is making an effort to cover the face, including Prasad who does the talking.

“Everything is fine. There is no need to cover our faces nowadays,” he says with a smile. Those with him nod in varying degrees to endorse his point of view.

While the administration has taken several steps in an effort to limit the impact of COVID-19, the average Patnaite hasn’t responded to the need of the hour. That must happen soon. Or else, the worst shall be worse than it could have been.

The writer is a freelance journalist. Views expressed are personal.​