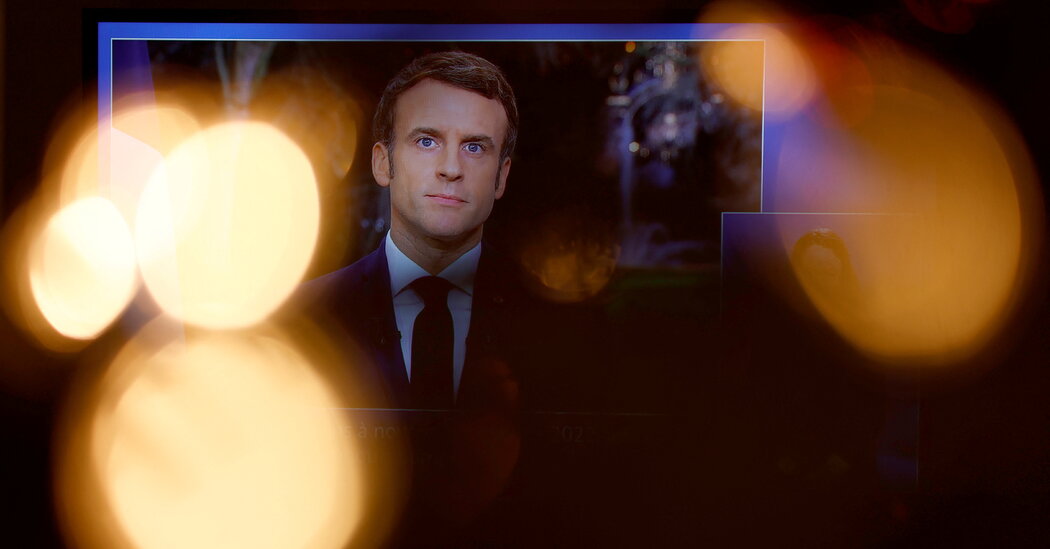 Macron Under Fire for Vowing to Make Unvaccinated Miserable

President Emmanuel Macron of France drew fierce criticism on Wednesday, mainly from his political opponents, after bluntly arguing that the government should make life miserable for the unvaccinated, as skyrocketing infection rates have put him under pressure ahead of a presidential election.

“I really want to piss off the unvaccinated,” Mr. Macron said in an interview with a panel of readers of Le Parisien, a newspaper. “And so we are going to continue doing that, until the end.”

Mr. Macron appeared to be trying to capitalize on frustration in France with the unvaccinated. But some critics worried that his crude tone could unnecessarily antagonize anti-vaccine activists, while doing little to convince those who are reluctant to get vaccinated.

Mr. Macron said that those who had refused coronavirus vaccines were part of a small minority. About three-quarters of France’s 67 million people are fully vaccinated, but roughly five million French people have not received a single shot.

Instead, the government is pushing a bill through Parliament that will tighten the eligibility of France’s health pass by no longer allowing people to obtain one with negative tests. The pass grants access to restaurants, cafes, museums and other public spaces.

Once the bill is approved, only proof of vaccination — or, in some cases, of recovery from Covid-19 — will be accepted, effectively barring the unvaccinated from large sections of French social life.

France has seen record-breaking numbers of new confirmed cases almost every day over the past week — over 270,000 for Tuesday alone — and hospitalizations are steadily increasing. But unlike some of its European neighbors, France has balked at imposing restrictions like curfews or lockdowns to keep infection rates in check.

Mr. Macron has consistently made it clear that his government’s strategy was to make life for unvaccinated French people uncomfortable. But his comments, which were published late Tuesday on the newspaper’s website, marked the first time he put it so crudely, even as the rapid surge of the Omicron variant of the coronavirus is already fraying France’s social contract on Covid.

The comments quickly caused an uproar in Parliament, interrupting a session where lawmakers were debating the government’s vaccination bill. Reaction from his political opposition was swift.

Christian Jacob, the head of the right-wing Republicans party, told lawmakers that the comments were unbecoming of a French head of state. “I cannot support a bill whose only goal is to piss off the French,” he said.

The global surge. The coronavirus is spreading faster than ever at the start of 2022, but the last days of 2021 brought the encouraging news that the Omicron variant produces less severe illness than earlier waves. As such, governments are focusing more on expanding vaccination than limiting the spread.

Return to office. For many businesses, the recent surge has brought a swift reversal of return-to-office plans. In recent days, companies including Goldman Sachs and Chevron have begun to backtrack on workplace policies. Some are telling employees to stay home with just days, or even hours, to spare before their planned returns.

Marine Le Pen, the far-right leader and one of Mr. Macron’s main opponents in the upcoming election, accused him of “waging war” on the unvaccinated.

“Even if one doesn’t share their choice, they have broken none of our country’s laws,” she told reporters in Parliament late Tuesday, saying Mr. Macron had made a political and moral mistake. “He is continuing his policy of division, of pitting the French against one another,” she said.

Mr. Macron’s comments come in a heated political climate — less than four months before the presidential election — and after he vowed in a recent interview that he had learned from mistakes made earlier in his term, when his one-liners were regularly criticized as dismissive and out of touch.

The president’s opponents have maneuvered in Parliament to delay the passing of the vaccination bill, and his supporters have reported receiving death threats and insults because they are backing the legislation. One lawmaker’s home garage was the target of arson and hostile graffiti last month.

Stéphane Séjourné, a member of the European Parliament and close ally of Mr. Macron’s, defended the president’s comments, arguing on Twitter that it was the unvaccinated who were bothering the French by overburdening hospitals, exhausting health workers and “forcing the rest of the population to endure restrictions.”

“So yes, we have to piss them off in return,” he said.