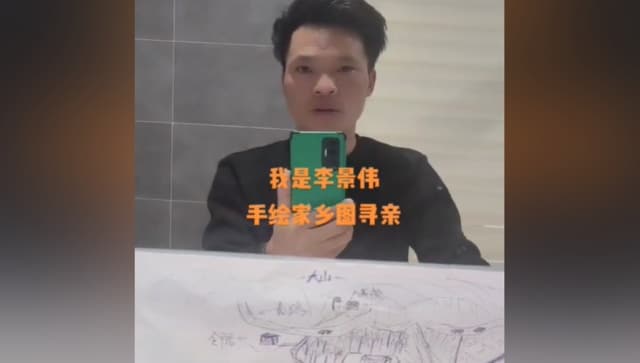 Due to China’s one-child policy, which was enforced till 2016, and families’ preference for a male heir, many boys in China were abducted and sold to couples who wanted a son

A man in China who was four years old when he was kidnapped, has reunited with his biological mother after 33 years.  Li Jingwei was reunited with his mother after he posted a map drawn from his memory on social media.
Li had been abducted and sold to a family in Lankao who was desperate for a son. However, he retained faint memories of his hometown, which was 1,600 kms away.

While the 37-year-old was aware he had been abducted when he was a kid, he was unaware of his real name, the name of his parents, or where he used to live. However, he decided to post a video with a rudimentary hand-drawn map of his childhood home on social media.

He said that the map was of his home area that he drawn from memory. “I’m a child who’s finding his home,” Li added in the clip, according to VICE.

The clip went viral on the app, with many people sending leads to the 37-year-old to help him reunite with his family. His home was narrowed down to a Zhaotong in Yunnan province. He was also put in contact with a woman potentially believed to be his birth mother. After DNA tests, Li was reunited with his biological family on 1 January.
Li was ecstatic about being reunited with his family, adding that he felt like he was born again.

This marks the latest in a series of high-profile cases where young men have reunited with their birth families after decades. Due to China’s one-child policy, which was enforced till 2016, and families’ preference for a male heir, many boys in China were abducted and sold to couples who wanted a son.