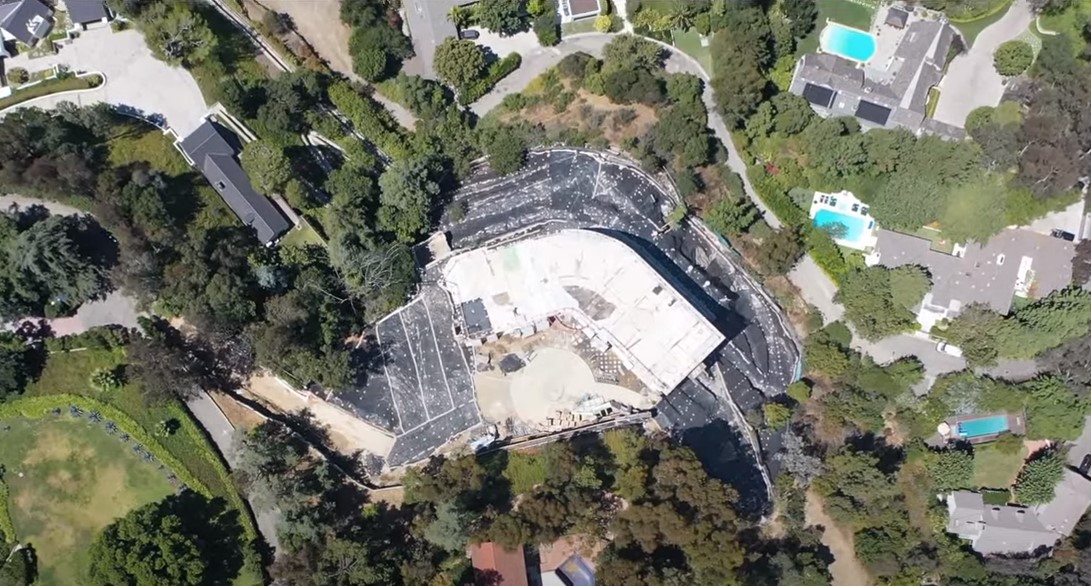 To some people, Mohamed Hadid is best-known for being the father of super models Bella Hadid and Gigi Hadid. Others may know him as the ex-husband of Yolanda Hadid-Foster, a cast member on “The Real Housewives of Beverly Hills.”

To the residents of Los Angeles’ ritzy Bel Air enclave, Mohamed is best-known for creating a real estate monstrosity that has been a legal nightmare for nearly a decade. A nightmare that may have finally ended this week.

Back in 2011, Mohamed paid $1.9 million for a hilltop plot of land in Bel-Air. After filing development plans he immediately received strong resistance from neighbors who felt the plans were way too large and overbearing for the area.

The city-approved construction plans gave Mohamed permission to build an 11,300 square foot home. Furthermore, the approved plans stipulated that the structure’s height not exceed 30 feet. The approved plans did not feature any underground dwellings.

Whether by sheer arrogance, accident or ignorance, Mohamed ended up building a 30,000 square foot home that was 82 feet tall. The structure also had multiple unapproved underground rooms including a 70-seat underground IMAX theater and several bedrooms.

Here’s a drone video tour of the partially-completed mansion:

Side note: At the 30 second mark in the above video, as the camera pans across the valley you can see another disastrous Bel Air property. The enormous white complex on the hillside is “The One”, which was touted as being a $500 million mansion but never found a buyer and ended up in bankruptcy.

Mohamed’s meighbors filed a lawsuit in 2017 demanding that the partially-built mansion be razed to the ground. At one point the FBI investigated allegations that Hadid bribed at least one city official to get the structure built. Mohamed ultimately pled “no contest” to criminal charges and agreed to perform community service as a punishment.

In November 2019, after determining that the structure was not salvageable, city officials ordered Hadid to tear down the mansion entirely.

A few days later, Mohamed submitted a stunning legal filing. This high-flying developer of Ritz Carltons around the world who had bought and sold hundreds of millions of dollars worth of real estate in his career, claimed to be unable to afford the cost to tear the Bel Air mansion down. In his defense, the estimated down payment on the demolition was going to be $500,000. And ultimately the demolition would cost $5 million.

At this point, the property was put under control of a court receiver whose goal was to find a qualified buyer who could afford the $5 million demolition cost and create a more suitable final product.

Earlier this week the court receiver agreed to allow a contractor called Sahara Construction Company to take over. Under the court’s terms, Sahara must follow-through on the court-ordered demolition while also re-stabilizing the hillside. Sahara has until September 2022 to complete the entire demolition. At that point they will likely build a more reasonable home on the property which they’ll try to flip for a big profit.

Mohamed has not released a comment on the sale but at the time he was claiming to be too broke to afford the demolition, he released the following statement:

“… My reputation is tarnished and my ability to go out and borrow other money is fractured at best. I am 72 years old and do not have the millions of dollars needed for the demolition of Strada Vecchia. I may have ‘paper assets’ but there are substantial loans against everything I own, this I have no liquidity with which to fund the demolition of 901 Strada.“