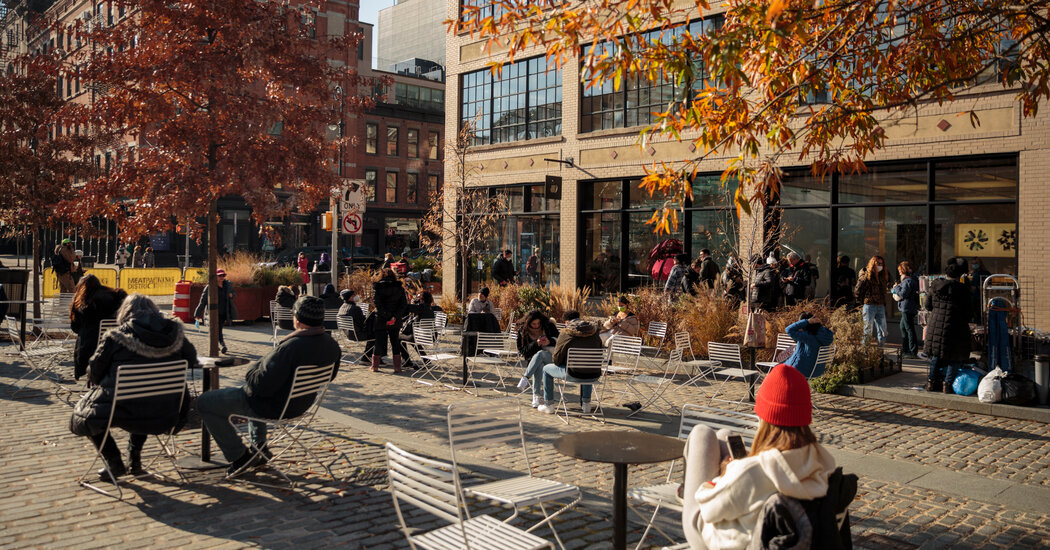 Omicron Surges in NYC During Its Comeback

On various occasions during the fall, I tried and failed to make a dinner reservation at Gage & Tollner, the historic restaurant on the Fulton Mall in Brooklyn that reopened during the spring to much fanfare, after 17 years.

Boosted before Thanksgiving and having recovered from a recent breakthrough Covid infection, I tried again this week in a new spirit of invincibility. Logging on to the restaurant’s website and also to Resy, I clicked on every night in January that the restaurant was open, in search of a table for two. This proved fruitless, unless I elected to eat at the bar on Sunday the 23rd at 10 o’clock, at which point I’d be replaying crucial scenes in a prestige cable drama to which I had fallen asleep. Shaking my head in disbelief and returning to my computer a few minutes later, I discovered that option was no longer available either. Surely, the vigilance with which the restaurant industry has checked the vaccination records of its patrons for months has fueled this prevailing confidence.

Even as Omicron has torn through the country in the final weeks of the year, upending everything, setting case records, canceling flights, causing long lines at testing sites, threatening a smooth reopening of school in January, returning us to the devotional of the propane heat lamp, it is hard not to feel for New York an appreciation that is snobbish, imperious, unambivalent. Rivaling nearly any place on earth, the city’s vaccination rate among adults who have so far received one shot stands at 92 percent, a figure achieved before a mandate requiring private-sector employers to have their workers immunized went into effect this week.

Mask wearing on the subway and even on the street where you don’t have to cover your face — unless you are avoiding cloud bursts of weed smoke or the cold — is robust to the point that we must imagine it leaves public health officials in other places dumbfounded and envious. “There’s a matter-of-factness and a lack of whimpering, which gets everyone through,” as the playwright Paul Rudnick put it on Twitter the other day, making note of these commitments.

This leaves the city also distinguished by virtue of its failure to produce a churn of viral videos of people attacking one another in fits of pandemic-bred righteousness. The most recent of these was generated during a flight between Florida and Georgia in which a former professional cheerleader, eventually taken into custody by the F.B.I., motioned to punch a man behind her for not wearing his mask while he was eating, even though she wasn’t wearing one either. In New York, if people are going to go at one another, it’s over access to home test kits.

In the post-vaccination phase of the pandemic, this year, New York proved itself newly desirable by a crude and perhaps all too literal measure of livability, which is to say that you could be here and reasonably expect that if you were in an emergency room needing critical care, you probably would not die waiting for a bed that was slow to materialize in a hospital full of unvaccinated patients very sick with Covid. This may not constitute the sexiest reason to move somewhere, but it suggests an appealing system of shared values that amounts to a collective good.

Despite the predictions made during the early and most dire stages of the current crisis, people actually did move to New York. A November report released by the city comptroller’s office found an estimated net gain of more than 6,300 people newly moved to the city since July of this year, according to data from the United States Postal Service. For the most part they populated downtown Manhattan neighborhoods that had experienced the greatest proportion of flight during the height of the pandemic; 14 city neighborhoods outperformed trends predating the arrival of the virus. The report also found that in 2020, New York City lost fewer people to moves, per capita, than Washington or San Francisco.

Some of this might have been obvious to close followers of the real estate market, which soared in many parts of New York in recent months. By the end of October, average sale prices for homes in Brooklyn hit a record for the fourth quarter in a row. Brooklyn has also seen signings on new leases climb for the past 15 months. Further indicating a rebound, rents jumped close to 23 percent across the city in November over the same period last year.

Beyond that, the whiff of excess, which in so many ways defines New York, seems pungent again. Last month, the art collection of the real estate developer Harry Macklowe, amassed with his ex-wife, went up for sale at Sotheby’s, bringing in $676 million, which an executive at the auction house called “the most valuable single-owner auction ever staged.” A Mark Rothko painting that sold for $82.5 million — more than $12 million above estimate — set the second highest ever auction price for a work by the artist. Observers noted that the auction represented the first big test of the high-end art market in the pandemic age — the news, for those who benefit from such transactions, was obviously good.

In my own corner of Brooklyn, any return to a dubious normal has been balanced by a new sense of opportunity for a place — on and around Montague Street — where empty storefronts and a bleak retail scene were prominent factors before the pandemic. But because of a push from community leaders and ordinary people, who in some cases have invested in businesses to lure them to the neighborhood, new shops have come and new restaurants are coming. I don’t doubt that when they arrive, it won’t be easy to book a table.