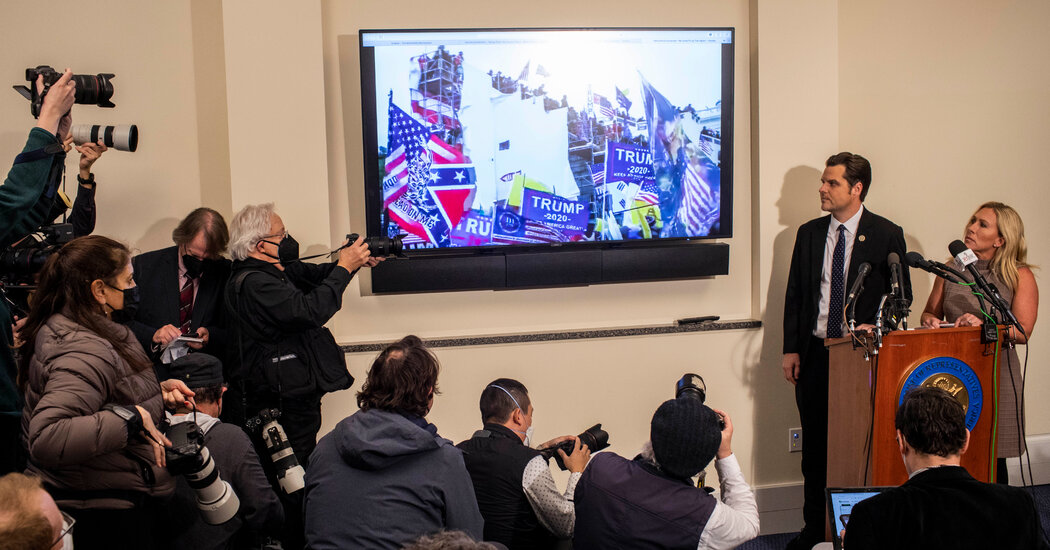 WASHINGTON — Republicans were nowhere to be found at the Capitol on Thursday as President Biden and Democratic members of Congress commemorated the deadliest attack on the building in centuries, reflecting the Republican Party’s reluctance to acknowledge the Jan. 6 riot or confront its own role in stoking it.

There are currently more than 250 Republican members of Congress — 212 in the House and 50 in the Senate. Not a single one of those senators appeared on the Senate floor to speak about how rioters laid siege to their workplace in the name of former President Donald J. Trump, sending them fleeing for their lives.

And when lawmakers gathered in the House chamber for a moment of silence to commemorate the riot, only two Republicans joined: Representative Liz Cheney of Wyoming, who has been ostracized and marginalized by her party for speaking out against Mr. Trump and his election lies, and her father, former Vice President Dick Cheney.

The only Republican-led event on Thursday to commemorate Jan. 6 was hosted by two lawmakers on the fringes of the party, Representatives Matt Gaetz of Florida and Marjorie Taylor Greene of Georgia. Seeking to deflect blame from Mr. Trump, they held a news conference to elevate unproven conspiracy theories about the origins of the assault on the Capitol.

“I think it’s a reflection of where our party is,” Ms. Cheney told reporters. “Very concerning.”

Some Republicans cited a scheduling conflict. Senator Mitch McConnell, Republican of Kentucky and the minority leader, was in Atlanta attending the funeral of former Senator Johnny Isakson of Georgia, along with at least a dozen other senators from both parties.

In a statement, Mr. McConnell called Jan. 6 “a dark day for Congress and our country” in which the Capitol was “stormed by criminals who brutalized police officers and used force to try to stop Congress from doing its job.”

But he also made clear that he thought Democrats were playing politics with the day, accusing them of trying to “exploit this anniversary to advance partisan policy goals that long predated this event.” He was referring to plans by Democratic leaders to try to abolish or weaken the legislative filibuster to push through voting rights protections that Republicans have blocked.

Both the Justice Department and a House select committee are investigating the events of the Capitol riot. Here’s where they stand:

Mr. McConnell did not refer to Mr. Trump in his statement.

Representative Steve Scalise of Louisiana, the No. 2 House Republican, took the same strategy in an interview on Fox News, calling Jan. 6 “a day that nobody wanted to see happen” and noting that he had swiftly denounced the rioters. But he quickly pivoted to blaming Democrats, saying they had made the anniversary “a politicized day.”

“Most of America wants Washington focused on their problems like inflation, high gas prices, the Covid resurgence, the border crisis, which President Biden and Speaker Pelosi continue to just let go unanswered,” Mr. Scalise said, “because they want every day to be about Jan. 6.”

Scores of other Republicans said little or nothing one year after they evacuated the Capitol as throngs of Mr. Trump’s supporters poured into the building, disrupting the counting of electoral votes to confirm Mr. Biden as the winner of the presidential election.

It was unclear on Thursday how Representative Kevin McCarthy of California, the House Republican leader, spent the day. Mr. McCarthy invoked the former president’s wrath when he said hours after the Jan. 6 attack that Mr. Trump bore responsibility for the riot; he has since walked back those remarks.

“It’s not a leadership that resembles any of the folks I knew when I was here for 10 years,” said Mr. Cheney, a former House member who served as the Republican whip.

In a separate statement later on Thursday, Mr. Cheney added, “I am deeply disappointed at the failure of many members of my party to recognize the grave nature of the Jan. 6 attacks and the ongoing threat to our nation.”

Mr. McCarthy’s tortured attempt at responding to Jan. 6 illustrates why many Republicans have preferred to say as little as possible about the attack, focusing on the valiant efforts by law enforcement officers to protect the Capitol rather than the leader of their party who egged on the rioters.

Representative Tom Rice of South Carolina, one of 10 Republicans who voted to impeach Mr. Trump for inciting an insurrection, was one of the few Republicans who spoke out on Thursday to lay responsibility for the attack at the former president’s feet.

In an unusually blistering statement, Mr. Rice called Jan. 6 “the day we nearly lost the country our founders fought for.”

“Any reasonable person could have seen the potential for violence that day,” he said. “Yet, our president did nothing to protect our country and stop the violence. The actions of the president on Jan. 6 were nothing short of reprehensible.”

In the hours and days immediately following the storming of the Capitol, many congressional Republicans and their aides, who were left to barricade themselves behind desks and doors during the attack, were openly furious. Some appeared to believe — or hope — that their party would at last break away from Mr. Trump.

“Trump and I, we’ve had a hell of a journey,” Senator Lindsey Graham, Republican of South Carolina and a close ally of Mr. Trump, said at the time. He added: “All I can say is, count me out. Enough is enough.”

In a speech on the Senate floor in February, Mr. McConnell said, “There’s no question — none — that President Trump is practically and morally responsible for provoking the events of the day.”

But seeing that their voters still revered Mr. Trump, most of those Republicans have since gone silent, preferring to avoid opining on the events of Jan. 6 and leaving those not in elected office to take up efforts of resistance. The few Republican lawmakers who have not followed that approach, including those who voted to impeach Mr. Trump for inciting an insurrection, have become pariahs in their party.

Karl Rove, a top Republican strategist and architect of the modern conservative establishment, used a Wall Street Journal opinion column on Wednesday to rebuke “those Republicans who for a year have excused the actions of the rioters who stormed the Capitol, disrupted Congress as it received the Electoral College’s results and violently attempted to overturn the election.”

“There can be no soft-pedaling what happened and no absolution for those who planned, encouraged and aided the attempt to overthrow our democracy,” Mr. Rove wrote. “Love of country demands nothing less. That’s true patriotism.”

Stephanie Grisham, who served as White House press secretary for Mr. Trump, said on CNN on Thursday that a group of former Trump administration officials were planning to meet next week in a long-shot effort to “try and stop” the former president.

But for the most part, Republican lawmakers and operatives at odds with Mr. Trump have found themselves pushed to the margins of today’s Republican Party.

Instead, figures like Mr. Gaetz and Ms. Greene have basked in the spotlight and won the approval of Mr. Trump’s most ardent supporters, lionizing the rioters and claiming that the former president bears no responsibility for the violence that took place on Jan. 6.

At their news conference at the Capitol on Thursday, Mr. Gaetz and Ms. Greene proposed that if Republicans take control of the House in the midterm elections, they should use the House committee investigating the Jan. 6 attack to look into whether federal agents stoked the violence against Congress.

There is no evidence that federal agents played any role in the assault, which occurred when supporters of Mr. Trump, who falsely claimed that the election had been stolen from him, stormed the Capitol.